Remember back on July 30, the Commerce Department reported that Gross Domestic Product (GDP) decreased at an annual rate of 32.9% in the second quarter of 2020. It was the worst quarterly decline in history. And unfortunately, that almost 33% decline was on the heels of a 5% decline in the first quarter.

Well on October 29, the Commerce Department reported that the “Advance Estimate” of Third Quarter 2020 GDP increased at an annual rate of 33.1%. It is the best quarterly increase in history. 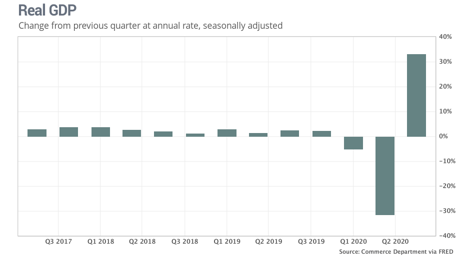 Should investors get overly excited that the third-quarter GDP numbers came in north of 33%? Because after all, not only is it the biggest GDP gain of all time, but it’s more than double the previous record (which was about 16%).

The answer is no.

The Commerce Department’s Bureau of Economic Analysis (BEA) compiles the GDP report monthly and it is one of the most closely watched reports on our economy given how much economic information it contains. Not only does the GDP report provide detailed data on how our economy is performing, but it also provides data that can help investors identify certain trends going forward. Broadly speaking, there are four main components of the GDP report, including:

The data from the BEA’s GDP report includes a wealth of information, including details on how much we spend and on what, inflation indices, corporate profits and details on imports and exports.

As such, all investors should heed GDP numbers because the data paints a very good picture of the economic backdrop for both equity and fixed-income markets alike, which of course helps inform the performance of their portfolios.

Reasons for the Worst/Best GDP Numbers

Unless you’ve been living under a rock, you know the reason behind the sharp decline and rapid increase in our quarterly GDP numbers: COVID-19. In fact, this is taken directly from the recent GDP releases in July and October:

“The decline in second quarter GDP reflected the response to COVID-19, as "stay-at-home" orders issued in March and April were partially lifted in some areas of the country in May and June, and government pandemic assistance payments were distributed to households and businesses. This led to rapid shifts in activity, as businesses and schools continued remote work and consumers and businesses canceled, restricted, or redirected their spending.”

“The increase in third quarter GDP reflected continued efforts to reopen businesses and resume activities that were postponed or restricted due to COVID-19.”

The Markets Look Forward, Not Backward

It can be challenging to reconcile why stock markets could conceivably perform well amidst a constant barrage of negative economic news or why they could perform poorly amidst a barrage of positive economic news. Intuitively, it just doesn’t make sense. But the apparent disconnect between markets and the economy is actually normal.

This is because the economic data we are bombarded with is backwards looking. It tells us what happened. The GDP numbers, for example, report the quarter that ended almost 30 days ago. In fact, most of the other monthly economic data captures what happened in the previous month – with some data reports going back two months.

The stock markets, on the other hand, are forward-looking.

How forward does the market look? Well the answer to that depends on who you ask. But generally speaking, the markets look forward at least a couple of quarters, maybe even as much as 18 months.

Going forward, we do know this: we will continue to receive more very positive economic news, especially as data from the third quarter continues to be compiled.

It should be viewed with perspective.

All information is believed to be from reliable sources; however LPL Financial makes no representation as to its completeness or accuracy.
The opinions voiced in this material are for general information only and are not intended to provide specific advice or recommendations for any individual.
Past performance is no guarantee of future results.
This article was prepared by FMeX Publishing.