History says that Value should have outpaced Growth during COVID – nope

Are you a Growth investor or a Value investor? Or do you prefer a mix of the two? Understanding your style of investing is an important step in deciding where to allocate your portfolio – but trying to predict which style will outperform relative to the other is as challenging now as it has ever been. And COVID has upended the debate in ways few could have predicted.

But once COVID started dominating the news and the markets at the end of the first quarter, you probably concluded that Value stocks would hold up better than Growth, right? And your conclusion made a lot of sense because Value has historically held up better during market downturns.

The Growth and Value Styles

At a very rudimentary level, the stock market can be divided into two halves: Growth and Value halves (some like research firm Morningstar suggest three thirds instead: Growth, Core and Value, with Core being a category that exhibits neither overwhelming Growth nor Value characteristics). Whether a stock is considered Growth or Value depends on a number of factors relative to other stocks.

Morningstar uses the following components and prescribes weights to determine whether a stock (or mutual fund) should reside within the Growth, Value or Core Style:

While those metrics are of course helpful, intuitively you can probably deduce whether a stock is considered a Growth or Value stock. While not fool-proof, the Growth names are the ones that are the exciting ones doing exciting things, whereas the Value names are the stodgier ones.

But – what one investor considers stodgy might be overly exciting for another investor – so it’s best to stick to fundamentals.

Growth vs. Value During COVID

Shockingly, not only has Growth outpaced Value since the beginning of 2020 – Growth has trounced Value since COVID pushed markets to their troughs on March 23.

Consider that according to Morningstar, since the beginning of the year and through September 30:

But wait, it gets worse. Since the market bottom on March 23rd and through September 30:

Morningstar also examined the Growth versus Value story through the mid-way point this year and here is what they concluded:

“Across one-, three-, five-, and 10-year time frames, and for large-, mid-, and small-cap stock funds, growth is outperforming value by the largest margin since the tech-stock bubble of 1999.” 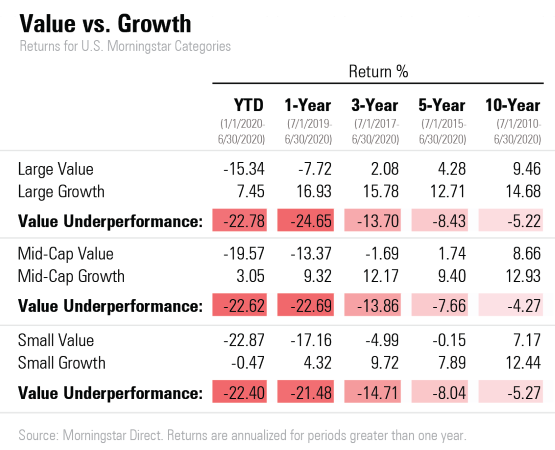 “First, over the long term the two have performed about the same. The entire outperformance by growth is accounted for by the last seven months. Yes, really. If you’d put $1,000 each into these MSCI US (large cap) Growth and Value indexes in 1974, and just left it there, reinvesting the dividends, through February of this year “value” had actually done slightly better than “growth.” (ignoring taxes and trading costs). Only since March has growth moved ahead.”

Further, Arends reported that when you look at the monthly performance since 1974, you find that:

What Should You Do?

So, if you are just reviewing your mutual fund performance so far in 2020, you are probably asking yourself: “why should I be invested in Value stocks at all?” That’s a great question and one that no one can suggest a blanket answer that makes sense for everyone.

That being said, surely you remember the Growth years of the late 90s and the Value years in the early 2000s? Right? Well, the same long cycles happened in the 70s and 80s too. Do you really think you can predict when Value will start outpacing Growth?

Instead, maybe investors should ask another question: am I a Growth or Value investor or maybe a combination of the two? Once you have determined that answer, your financial advisor can help make sure that your investments are consistent with your style of investing.